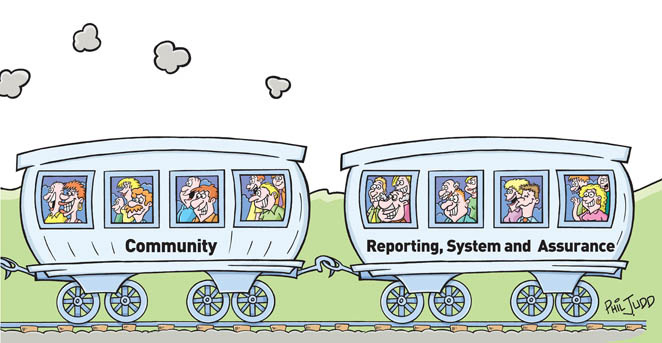 This event was a conference in Northern Queensland for BHP Billiton staff and managers. The conference was focusing on the areas of work environment and team building.

The process was as follows:

The final mural poster was then displayed at the head offices and has been kept as part of their planning.

6. As an outcome of the conference, Phil provided images of the mural to be used for training purposes.

I used Phil Judd, from Comic Express, for one of our function biggest event, we used him to illustrate the concept of the business in a comical way and it was very well received by the audience.  Phil was great to deal with; he attended to all my queries with patience and in a timely manner.  I was given the chances to review the drafts, and make changes where I saw fit.  Phil seems to have lots of experience, and I sometimes found that he can read my mind and know exactly what I want.  The final product was just immaculate, it was the talk of the town until now.  Phil’s work ethic is second to none and I was so glad that I was dealing with him.

Our mailing list keeps you up to date with our broad range of services including lessons, Cartoon Workshops, Custom Artwork, Shop and Graphic Recording.